Shamanism,  the oldest healing art in the world

The topic is explained in detail in my book "THE SHAMAN'S WAY OF HEALING - in the light of western Psychotherapy and Christian Tradition" by August Thalhamer, theologian, psychotherapist, economic psychologist and urban shaman:

The Shaman's Way of Healing

In Light of Western Psychotherapy and Christian Tradition

You can order the book here

The world of spirits, with whom you come into contact while traveling, is nothing elsethan the landscape of the collective unconscious. 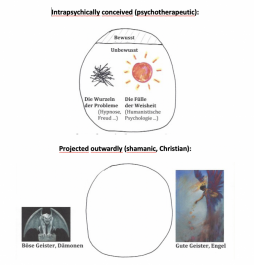 In the Freudian tradition, spirits would be called projections.

In the shamanic tradition, however, one asks "Who?" from the outset, thinking of ancestors or demons who burden or harass the patient. And one thinks of redeemed ancestors or good powers like angels who protect one. The shaman seeks out the good spirits in the shamanic journey to the Otherworld (this is what the shaman's trance state is called) and guided by them she sets about fighting, appeasing, keeping in check, or transforming the patient's demons.

"Projecting" means "throwing forward." But I can only throw what I have with me. From there, it is irrelevant if these resources are experienced intrapsychically or as entities outside of me. Obviously, These are different ways of expressing the same thing, just as one can express the same content in different languages. Since I work both psychotherapeutically and shamanically and find no difference in effect whether I let myself be guided by my spirits in a shamanic healing ritual or by my intuition during a psychotherapeutic session, this reinforces my hypothesis.

If you compare the shamanic "soul retrieval" with the Gestalt-therapeutic "reintegration of split-off personality parts", you will discover that they only differ in the outer form of the procedure.

The primary goal of shamanic healing treatment is to bring the patients back into harmony with the rest of nature and the human community as well as with the supernatural powers. Once they are reintegrated into the given divine order, they are considered healed, even if the symptoms have not moved so much, which is rarely the case anyway.

Basic assumptions in the shamanic tradition:

First basic assumption: In addition to the visible one, there are other worlds.
This is also an essential part of all later religions, that there are other worlds besides the world that can be perceived with the senses and measured with instruments: Nature and supernature, this world and the hereafter, immanence and transcendence. To those who have been socialized religiously, this is not alien.
More strange for the neopositivistic ideologists among the natural scientists is the

A hint from our Western research is offered by Darwin's theory of evolution, which states that everything that exists has evolved from primordial matter, whereby there is nothing that is not related to us.
Even more difficult to digest for some is the

Third basic assumption: Everything that exists is animated.
Of course, a table does not have a human soul, but it too is alive in a certain way from a shamanic point of view.

Interesting hint from Western research: everything, not only humans consist of atoms, structures that are empty but full of energy and movement.

If one starts from these basic shamanic assumptions, it is obvious that this connection of everything to everything can also be used for communication and contact, e.g. with a patient in a healing treatment:

So I go into a trance during a shamanic session: then, as in a dream image (usually in allegorical form), I see what is going on with the patient and, intervening in the image, I can often put it right. The least exhausting treatment: I don't have to think about anything, but get diagnosis and form of therapy from my guides in the other world. I only have to follow their instructions and carry them out.

This procedure is not common in Western therapy: here, for example, in classical hypnosis, only the patient goes into a trance. However, there are also comparable experiences in the therapy methods recognized in the West: Freud's student C.G. Jung, for example, met his spirit guide in extraordinary reality, who called himself "Philemon" and gave him crucial insights. And he emphasizes:

"We are so entangled in our subjective consciousnesses, that we have simply forgotten the fact that God speaks mainly through dreams and visions.”
Jung represented the thesis that he drew here from the "collective unconscious".

Note from our Western research: Although the quantum theory according to Carl Friedrich von Weizsäcker denies the dualism of the philosopher, mathematician and natural scientist René Descartes (†1650) long ago, we still think dualistically everywhere today. Descartes had distinguished between
the "res extensa" (the extended thing - the matter) and
the "res cogitans" (the thinking thing - the mind).
Weizsäcker 1992 in a lecture with the title "The philosophy of a physicist": "Matter is information".

If I would not experience continuously serious effects of shamanic treatments (in efficiency comparable with medical and psychotherapeutic healing work), I as a scientifically educated person would consider all this as fantasies. Methodological doubt has advanced our Western science significantly. But if you deniy facts, you are no longer a skeptic, but an ignorant.

Résumé
In our culture, these huge resources, whether described intrapsychically or shamanically, are far too little utilized. Our world would look different if we would let ourselves be guided not only by our intellect but also by our inner wisdom, respectively by the good spirits. It is not about an either-or, but about a respectful both-as well.